I woke up in this amazing city thinking about the dinner I ate last night. I'm looking out at the Mississippi River from my room at the Hotel Monteleone, the home of the famous Carousel Bar. (The seats at the bar go round and round...)
Flew into the Crescent City yesterday, past wicked thunderheads, the clouds looking like cauliflower cotton candy. It poured on the drive in from the airport, but the rain offered sweet relief from steamy temps.
The first meal of this moveable feast set the bar very high. It was at MiLa, the super stylish spot created by culinary power couple Slade Rushing and Allison Vines-Rushing. The menu is nouveau New Orleans: Oysters Rockefeller Deconstructed, Sweet Tea Rotisserie Duck, a reimagined root beer float, sweetbreads on black truffle grits. All pretty dang brilliant.
A word about those grits: Chef Allison -- recently featured in Bon Apetit -- came out to the table while our party was devouring dessert and I asked about the secret to those great grits. "You've got to cook them in milk," she said. "We don't use fancy grits, but we cook them in milk and finish them with butter and cream and bits of truffle shavings." The flavor was intense.
Come to think about it, that's what I love about this city and its incredible food... the flavors are so intense. Dishes are seasoned assertively. There's no timid sprinkle of something. It's bold. And beautiful. I wish I had a better photo to share of the lovely oysters, the most petite bivalves I've had from the Gulf, bite-size beauties perched on a throne of sauteed spinach, a crispy piece of bacon on top.
The best chefs inspire imitation, don't you think? And I'm already dreaming of trying to recreate some of the incredible dishes I ate last night.
at 6:02 AM No comments:

So high on summer 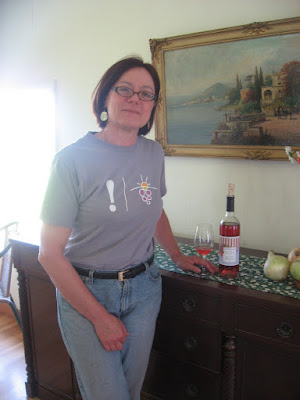 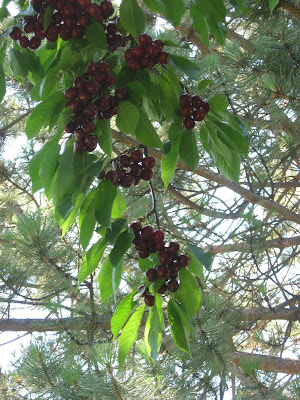 Had the best trip to Eastern Washington. Some Walla Walla highlights: Great meal at Saffron included sensational rabbit lasagna and the newly released 2006 Northstar merlot. Talk about a great combo!
Also a yummy blackberry shake from Ice Berg Drive In, French onion soup made with Walla Walla Sweets at Brasserie Four, a meatball sammie at T. Maccarones and the best $1.50 taco from a truck on the west end of town.
Then, driving back to Seattle, I stopped at Chinook, one of my all-time favorite wineries to pick up a bunch of rose. It had just been released and when I poured it alongside my pesto-Walla Walla Sweet Onion Tart last night, I was blown away. If there's a better rose made in this country, I want to hear about it. This one is so well-balanced, the soft fruit perfectly matched with a crispness that makes it so fine for summer sipping.
If scoring the wine wasn't cool enough, winemaker Kay Simon invited me to help myself to the cherries on the trees near the tasting room. She helped me pick! I came home with two bags.
I also came home with 50 pounds of Walla Walla Sweets! Who wants some? Or, who wants to share some onion-centric recipes?
at 1:43 PM 1 comment:

Out of this world oysters! 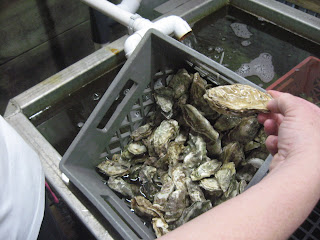 There's a new oyster grower on Orcas Island that I'm predicting is going to blow up big. Buck Bay Shellfish, down the road from Olga, has only been around for about a year, but man, they've got some great product.
I loved that you get to pick your own from crates sitting in water out of the postcard-pretty Buck Bay. Owner Toni invites customers to use the oyster knives just outside the shed to pry open the succulent bivalves, which were perfectly bite-size, salty and a kiss of sweet.
They buy the seed from Taylor Shellfish -- they grow native Pacifics and sell several sizes, including monsters that look a lot like Gulf oysters -- and talk about the advantages of being in a bay that has a lot of tidal action. So far, no restaurants in Seattle have come calling, but this gem won't be a secret for long.
I know there's no "R" in June or July, but there are still heaps of oysters to eat. What's your favorite?
at 8:38 AM No comments: 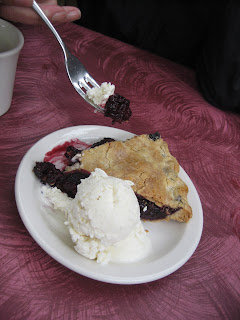 Just returned from an incredible trip to Orcas Island, where I had some memorable meals and the best piece of blackberry pie at Cafe Olga. Because we're still weeks away from blackberry season, these berries had to be frozen, but they didn't taste like it.
My frustration with making blackberry pie is the filling is always way too runny. I'm determined to get a handle on this come August, though. (And would appreciate any helpful hints in my quest to make the perfect pie filling.)
As my sister, Laurel, and I savored this generous wedge of bliss, we talked about our all-time favorite pies. Peach and apple and coconut cream. I absolutely love lemon meringue. Why is it so hard to find a good piece of lemon meringue? Yesterday, while driving through Magnolia, I spotted a hopeful sign: Coming soon, Seattle Pie Company. I hope it's the sweet kind of pie, not a pizza joint. Stay tuned for tasting notes.
In the meantime, let's go to that sweet spot: When it comes to pie, what's your favorite flavor?
at 7:46 AM 6 comments:

I've been on board the rose fan wagon for a few summers now. Lucky me because the numbers of interesting pinks just keeps growing.
I wrote about a few of my faves on Al Dente, but I'm wide open to suggestions.
As much as I enjoy a crisp, ever-so-slightly fruity pink, it seems to me as though there's a bigger chance of getting a post-wine headache than when drinking reds or whites. Can anybody explain to me why that happens? (And, yes, it is possible it might be about quantity rather than quality. Those roses go down easy, especially with warm weather fare).
at 2:11 PM 1 comment: 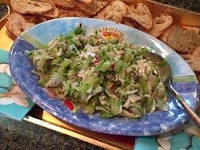 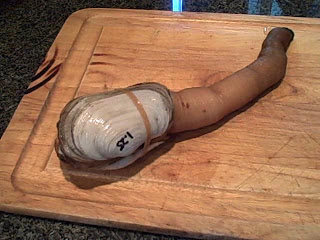 Been wanting to try making geoduck crudo since having it at Ethan Stowell's Anchovies & Olives shortly after it opened on Cap Hill this winter. Wrote a report on turning the funny looking creature on the left into the delish dish pictured on the right for Al Dente, Amazon's Food Blog on which I'm now a regular contributor.
Like so many wonderful things to eat, this was a pain in the neck to make. But, man, was it tasty. Which makes me wonder: Why isn't geoduck a bigger deal on restaurant menus? Probably a tough sell, but once people try it...
When is it all right to practice a little menu mystery writing? Maybe calling it crudo, serving it as an amuse and getting diners hooked.
Here's a short video I made of the geoduck crudo prep.
at 7:01 AM 1 comment:

OK, I'm cooking for a huge group next weekend for Baby Girl's grad party and decided to experiment by oven-roasting pork shoulder low-and-slow. It was largely prompted by the 99 cents a pound sale on pork shoulder at QFC. A enourmous hunk was less than $4!
Consulted with my BBQ guru, aka The Bottomless Pit, shortened to BP. This is my photog buddy who took me on a four-state, one-day epic BBQ tour a few years ago. (Missouri, Arkansas, Tennessee, Mississippi.) He gave me the in-a-pinch scenerio, which calls for covering the meat in a thinner-style sauce and cooking it at 250 degrees forever and ever. Low and slow and all day long.
Did that on Sunday. Pulled it after it cooled. Beauty chunks. Then, fired up the charcoal to finish it off. Kind of like they do on the flat-top at Big Abe's in Clarksdale, Mississip, at that famous crossroads where bluesman Robert Johnson sold his soul to the devil. Not really, but it makes for a heckuva story.
Had the pork sammies tonight and, gotta say, it was some mighty fine swine. Even if I didn't have the right sauce. (Only a thin sauce from Coopers in Texas, which I mixed with ketchup. Desparate times, desparate measures.)
At the dinner table, we talked about our favorite sauce. Mine's a toss-up between The Bar-B-Q Shop and Rendezvous. Claire loves Central. Ditto for Johnny. Course, those aren't available in Seattle. But I'm gonna try and get some sent. Any others to add to that list? Anything local?
at 7:56 PM 7 comments: