I'm going to be on Martha Stewart Living Radio! 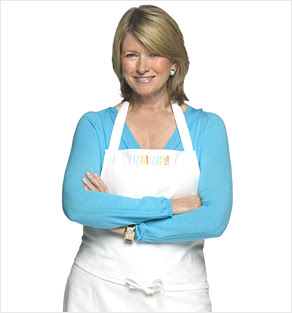 How cool is that?

I'm going to be on Morning Living with Kim Fernandez and Betsy Karetnick Wednesday, July 29 at 6 a.m. PST, 9 for my friends on the East Coast. The segment's called "The Dish" and it features restaurant critics from across the country talking about some of their favorite things, trends, seasonal stuff.

But we're also going to talk about my Critic-Turned-Cook project, which, this week, involves a trip to Culinary Farm School 101 at Quillisascut Cheese. Can't wait to take my turn on the milking stool.

You can sign up for a free trial of Sirius XM Satellite radio to hear my interview on Martha Stewart Living Radio. Here's the link.

Got any suggestions/advice/tips? Where's your favorite place to eat in Seattle these days?
at 7:14 AM 2 comments:

The saddest day of summer... 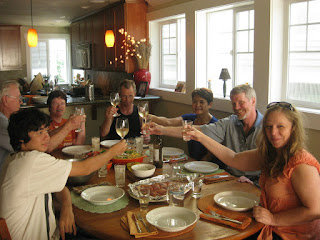 Every summer, we have family from overseas visit for several weeks. There's a whole lot of shopping and prepping and cooking and eating and doing dishes and starting all over again.

I just took the extra leaf out of the dining room table and seating for six has gone back to a four-top, set for just two this week. We get a taste of the so-called empty nest syndrome soon to be a permanent piece of our lives because Baby Girl's gone to Maui with the in-laws... on their trek back to Cambodia. (My brother-in-law works for the CDC and has lived in Asia and Africa for nearly 10 years.)

These quiet, post-visit meals always take some getting used to, especially since there's a lump in my throat. I hate saying goodbye. (Especially at the curb at SeaTac at 6 a.m.)

This summer visit, we shared some spectacular spreads: grilled King salmon on the Fourth, a Thai feast prepared by Ubon (and, no, she didn't give me recipes...), a weenie roast at cousins Marge and Jim's, seared flank steak and caramelized Walla Walla Sweets, gingerbread pudding. But no matter what we're eating, it's the sitting around the big table and talking and laughing and teasing and occasionally breaking into song that I love.

It's corny, but these gatherings feed me. The meals take me back to childhood memories, hanging out in the kitchen with my grandmother. Believe me, it sure wasn't all Norman Rockwell. There were some damn dark times, too, but I'm not going to go there. I'm just going to close my eyes and think about the lazy Sunday supper when my 17-year-old nephew suggested a post-dinner game of hearts. That moment was sweeter than any dessert.

What about you? Do you have visitors this summer? What are you feeding them?
at 5:34 PM 1 comment: 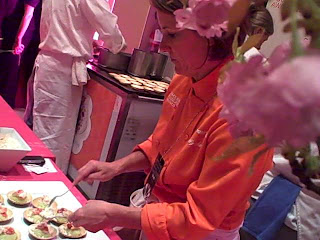 My friend and I were walking to the Pike Place Market today and didn't notice the signs that said "crosswalk closed", so she ended up walking onto some freshly poured sidewalk. Red-faced construction worker yelled at her and others who took the same path. A policeman showed up. Big drama.
But it was an honest mistake. Not like the muck I stepped in yesterday when I casually Twittered a helping of idle gossip I heard this weekend about Cafe Juanita being on the ropes. I very quickly heard from chef/owner Holly Smith, who was rightly upset. (That's chef Holly pictured above at the James Beard Foundation Awards in NYC in May.)
I also got chewed out by various followers on Twitter. I should have known better. I apologized. But I don't really feel like that's enough. I want to turn this negative into a positive by pledging to get myself out for a meal at Cafe Juanita as soon as possible.
While chef Holly and her hard-working crew are still pulling in appreciative diners, if the restaurant is like any other fine dining venue, I'm going to guess their numbers are down from this time last year. It's a tough business and getting tougher all the time.
I met the GM of Campagne last night and he told me the landmark restaurant near Pike Place Market is doing a makeover. Out with the white linen tableclothes, in with the bistro butcher paper and three courses for $30 daily. Chef Daisley Gordon recently launched a blog, letting fans know what he's up to in the kitchen. The Campagne lounge, not to be confused with Cafe Campagne downstairs, is one of the unsung gems of the happy hour circuit. All y'all get in there and support this fabulous place.
In fact, please go and eat and support your favorite fine dining restaurant. Heck, any restaurant. I know the end of my gravy train had to have some impact on the local economy. Last year, as the P-I's food critic, I spent nearly $40,000. Shocking, right? Three of those meals were at the Herbfarm, which was $500 for two.
I know belts have been tightened, but I would like to remind people that a vibrant restaurant scene is part of what makes Seattle so special. Please go out and dine.
Anyone want to join me at Cafe Juanita? (Where I'll be eating humble pie!)
at 4:12 PM 1 comment:

.... what has happened to pasta genius Justin Neidermeyer from Spinasse? Keep hearing gossipy dish that he was fired from the restaurant he launched because he wasn't showing up for work.
.... does anybody else notice a striking similarity between the menu at the new Bastille and Le Pichet/Cafe Presse?
.... even after glowing reviews Tillikum Park Cafe is often empty? Get in there and support this place!
.... how some lousy restaurants manage to stay open in this down economy when good ones go under?
.... when diners will finally get over this obsession with upscale mac-and-cheese? Yes, everybody's favorite comfort food tastes damn good, but it's a sign of a lazy, unimaginative kitchen. Let's move on.
.... why Tom Douglas isn't as famous as Mario Batali?
.... when there's going to be a backlash over review sites like Yelp.com? Oh, wait, that's already happened.
.... why more chocolate lovers haven't made the pilgrimage to Claudio Corallo in Ballard?
.... where can I find authentic Cajun-style boudin in the Northwest? (There is a boudin blanc on the menu at Le Pichet I wanna try.)
The first person who answers all these questions gets a picnic lunch at the Seattle Art Museum's Sculpture Park catered by me, Critic-Turned-Cook. Ready, go!
at 7:50 AM 5 comments:

Spreading myself too thin? 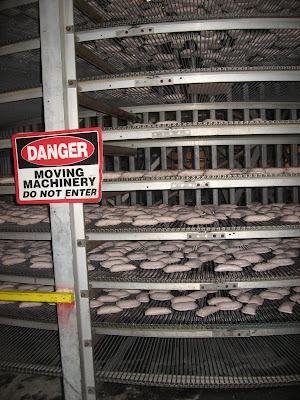 Hey guys and gals....
I wanna apologize for neglecting this space. I've been playing the field. Writing for other sites that actually -- gasp! -- pay me good money. (Thank you so very much SeriousEats.com and AlDenteBlog!)
While I feel a bit like I've been cheating, I also think there's enough food to go around. Three meals a day and snacks and reading and viewing while chewing make for endless options to chat about what's on everybody's plate, right? What I've always loved about blogs is the conversation, so I'm wide open to suggestions about what we should talk about. Recipes? Restaurant trends? Bizarre stories about service snafus. (Just got an earful from a friend who was so turned off by the behavior of a server, she left in the middle of the meal. She paid for the first course, but was too uncomfortable to stay. And, then, the owner chased her down on the sidewalk to ask why she was leaving. Well, I hope you come back someday, she said. Not bloody likely.)
Rants and raves aside, I wanted to share a couple pieces I wrote this week about my recent trip to New Orleans. I'm particularly psyched about the little film I made while touring Hubig's Pies. Click here for the link.
Also warmed by the memories of Cajun country and the hunt for the best boudin, which I wrote about for Serious Eats. Thanks for checking it out by clicking here.
at 7:54 AM No comments:

This is the best news I've heard all week: Friday at noon at the Pike Place Market, roving Northwest Cherry reps will pass out Rainier cherries. Sweet!

For a list of some Seattle restaurants giving cherries the star treatment they deserve, check out this link.

What's your favorite way to enjoy cherries? I love/love/love 'em straight up, eating them until I get a stomachache. You?
at 4:09 PM No comments:

My sister-in-law Ubon is a fantastic cook. Though she grew up in Thailand, she is a globally inspired culinary artist. Still, I'm forever asking her to teach me her secrets from her homeland.
I long to master complex curries and satisfying noodle dishes. But for those dishes, she works quickly and uses sense memory, not recipes.
Today, she's coming over for a visit and I'm determined to shadow her until I can soak up some knowledge. Will update this entry with photos and recipes. Any special requests?
at 8:59 AM 4 comments: 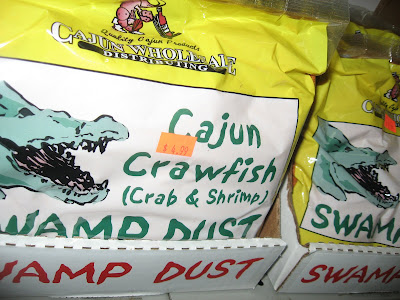 I sure hated to leave, so brought a little bit of New Orleans and beyond to my home sweet home. Here's what was in my very heavy luggage:
Swamp Dust
Hubig's Pies
A whole muffaletta from Central Grocery
Cajun seasoning from T-Coon's
Community Coffee
Pat O'Brien's Hurricane Mix
A crawfish paddle (picture a small oar)
Uncle Bud's Deep-Fried Cajun peanuts
A spray bottle of Cajun Grilling Spice, looks like Windex on fire
Two Cajun cookbooks
A Hubig's Pie apron
A crawfish magnet for my fridge
Roux mix
Wish I had room for a whole lot more. What's the wackiest food souvenir you've carted home after a memorable trip?
at 8:46 AM 3 comments: 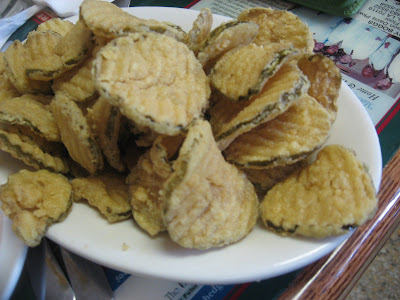 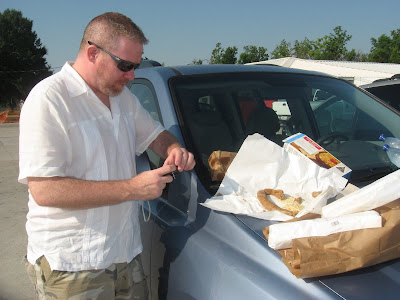 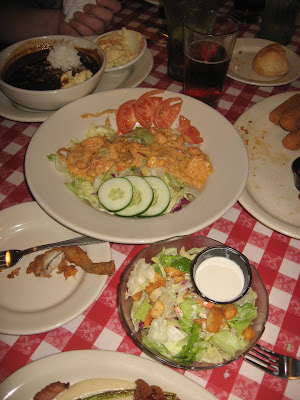 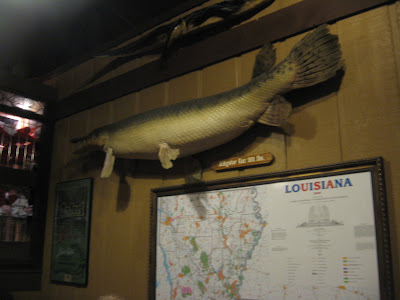 Such a great trip! Anybody who really loves food has to go visit New Orleans!! More details to come!
at 11:48 AM No comments:

On the road to Lafayette: A whole lot to digest 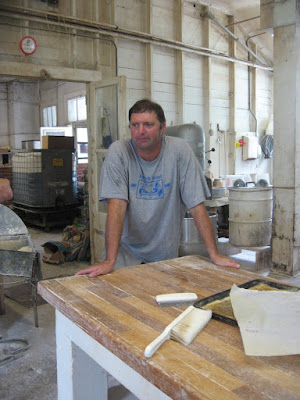 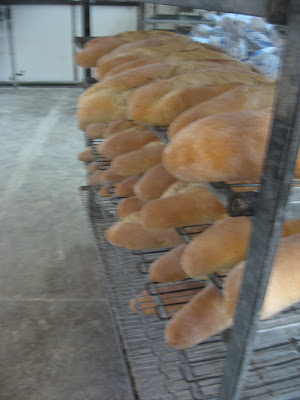 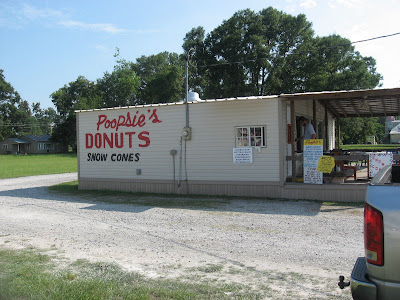 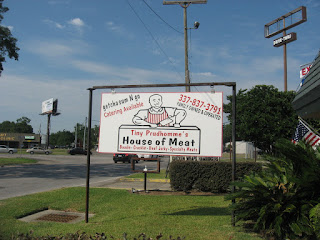 Started the day at Le Jeune's Bakery in Jeanerette, aka Sugar City, a spot with some ancient funk. And I mean that in the best possible way. The secret to their deeply satisfying loaves and po-boy rolls? Using malt instead of sugar to feed the yeast and using lard. The ovens at this special place looked like they belonged in a museum.
After a killer lunch at T-Coons (crawfish ettoufee!), we did a little drive-thru daiquiri and a "turn here, turn here, turn there please" detour to Tiny Prudhomme's House of Meat. Best damn cracklins ever.
During dinner at Prejean's, we were seranaded by a three-piece band that sounded as sweet as the smoked duck and andouille sausage gumbo was spicy. Another Abita please.
A pinky-size finger of Pappy Van Winkle neat and I'm off to dreamland, visions of two-steppin' couples at The Blue Moon dancing through my head.
at 9:53 PM 2 comments: 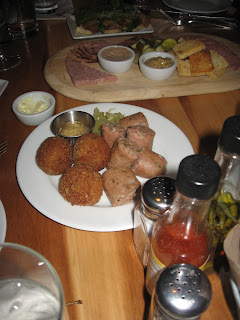 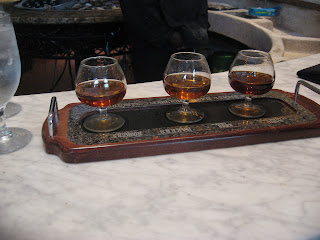 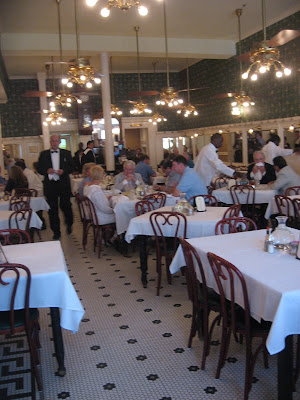 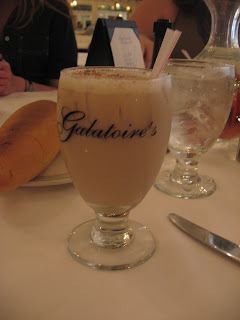 After the biggest eating day of my life, I woke up hungry. Imagine that! Details on yesterday's moveable feast in magical New Orleans to come.
I'm rushing out the door to hit the Boudin Trail... Best Stop. Then Zydeco Country, Lafayette.
at 5:41 AM No comments: